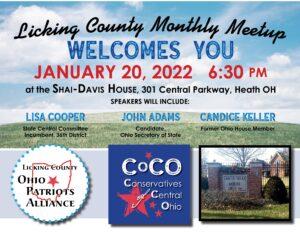 so that all of us get a closeup look at candidates for office, and current office holders, in order to better educate ourselves.

Our group is all about these “three E’s”

EDUCATE let’s be knowledgeable about the issues and candidates;

ENERGIZE let’s get jazzed about the things we can do to reform the GOP here in central Ohio; and

ELECT let’s elect the right people, let’s know what issues to support or to oppose

AGAIN, the JANUARY LICKING COUNTY MONTHLY MEETUP will be held on